The winner of the Street Machine Nationals Ultimate Performance Package is more than just your average car guy. Jeff McCormick is someone who has been a long-standing member in the automotive community and has become well-known with his car, nicknamed Sinister C4.

McCormick is a hands-on car guy, wanting to do everything he can on the car, and it started when he was young. That love for cars grew, and he found the career he had dreamed of.

“I’ve always had a love of cars and wanted to learn every aspect of them,” McCormick says. “I worked in a parts store in high school, then to a dealership when I graduated before working at a transmission shop, and then finally a speed shop. I was always trying to make myself a complete mechanic.”

“Working in the speed shop, I became familiar with Sports Car Club of America racing, and was given the responsibility of dynoing and preparing a car for the Playboy Endurance Series for a local customer,” McCormick continues. “The first year was a Toyota Supra, and then the second year was a Nissan 300zx turbo.”

The time McCormick spent at the speed shop would soon shape his destiny and give way to the vehicle that he would build.

“The car owner hired me as his crew chief, then hired me away from speed shop, and we had a deal to race a C4 corvette for the 1987 season,” McCormick explains. “It was now called the Escort Endurance Season; this sparked my love for the C4.”

“Going to Street Machine Nationals from 1979 to 1985, I saw those big tire cars, and it just fueled my dream to build one,” McCormick continues. “At the time, I had a pretty hot 1970 AMX, but it wasn’t tubbed because my dream was to have a pro street car.”

The True Meaning of DuQuoin

McCormick thought that all he wanted to do was build cars and everything about them. Life changed, and he felt that he needed to change.

“In 1989, after being burned out from all the racing and travel, and the constant pressure to be competitive with the cars and motors I was building, I walked away and got a real job with UPS as a tractor mechanic,” McCormick says. “Now married with three daughters in 2003, I still couldn’t shake that desire to build a pro street car, and with the love of the C4, I decided to build one because there weren’t many people crazy enough to build one of those cars.

“I wanted to build a car where I did everything myself—from the chassis, drivetrain, body, paint. I wanted to do everything. The only thing I had to farm out was the block machine work and crankshaft balance job because the speed shop I used to work at wouldn’t let me come in and use the equipment.”

Once a car guy has been bitten by the proverbial automotive bug, the itch never goes away. That was the case with McCormick, and that itch continued to grow.

“The car took until 2016 to complete because we were putting all three girls through college, and I wasn’t going to take money out of our family budget to build a hot rod,” McCormick says. “I got to know a lot of people on Pro Street Era Facebook page, so we took the car to DuQuoin in 2016.”

Having a vehicle built and taking it to a show is a huge step for any builder, and building it yourself makes it that much better. But the bug to upgrade continues.

“At PRI in December that year, I decided it was time to step up my game, so I built zoomies for the car and added ground effects, which gave the pipes a place to exit,” McCormick says. “In DuQuoin that year, we got top three Best Engineered and top three Legends of Pro Street picks.”

“That year we did several big events and even got invited and had expenses paid to do a show with Blow Mafia at Lowe’s Motor Speedway with several other pro street cars, which was a huge honor. Because of the influence of my fellow Pro Street Buddies, I decided to step my game up with a bigger blower and use Joe Blo Speed Shop’s hidden EFI plate.”

The DuQuoin Street Machine Nationals has always been a stop on McCormick’s list. He has brought Sinister C4 to the show many times and has won some awards.

“We ended up with Event Staff Pick Award in 2018; the car was a huge hit that year,” McCormick says. “We ended up having the car in the PRI show later that year, which was a dream come true because I never thought in my wildest dreams that this home-built hot rod could ever achieve that.

“We acquired some sponsorships after that, so the car kept changing, which was good and bad. It was really tough keeping up with engine changes and tuning since I was more of a carb guy and now had to learn to use a laptop.”

McCormick had more to worry about before DuQuoin in 2018. Right before leaving, he got shingles on his face and in his mouth, which then developed into Bell’s palsy.

“In 2019 and 2021, we received the Best Supercharged Award at the DuQuoin show,” McCormick explains. “We have so many great friends all over the country because of this silly car, but it feels like DuQuoin is coming home for us every time we show up.”

As the C4 sits now, it has a 427 big-block with plus 0.030 Diamond pistons, Eagle rotating assembly, along with Steve Morris solid roller custom-built heads with Comp Cams valve train. The car also features a Profiler tunnel ram built by Alkydiggers with a high helix TBS 871 Holley EFI, all backed by a Ram duel-disc clutch and Tremec TKO 600.

Out back, Sinister C4 has a 5.38 gear ratio with a spool and Strange axles, while it stops using Wilwood brakes. The C4 has an all-mild steel-tube chassis, RC Components wheels 15-by-16-inch rear single bead-lock rear wheels wrapped with Hoosier QTP 33-by-22.5-inch R15 rear tires. Up front are 17-by-4.5 wheels wrapped in 25-by-6 R17 tires.

In the height of all the shows, building the C4, and life, McCormick received news that he did not want to believe. He had been pushing through medical issues before he finally decided to go to the doctor.

“Since 2017, I have been having muscle issues, but I blew it off before it got bad enough that in November 2021, I saw a neurologist,” McCormick says. “After testing, I was diagnosed with ALS. I went for a second opinion because I didn’t want to believe it, but in February 2022, it came back with the same result.”

Amyotrophic lateral sclerosis, also known as ALS or Lou Gehrig’s disease, is a nervous-system disease that weakens muscles and impacts physical function. In this disease, nerve cells break down, which reduces functionality in the muscles they supply.

“My progression is slow right now,” McCormick says. “I have lost a lot of leg strength and core strength; I can’t even hold a cup of coffee out in front of me.

“I have lost the majority of my finger strength, which makes it a challenge to work on the car, but I have to keep fighting and pushing. I’m a man of faith, so I believe he will give me the strength to get through this no matter which way it goes.”

McCormick continues to fight each day and will not give up his passion for the automotive industry or his C4. The Street Machine National show has taken a different meaning in the past few years, but McCormick wouldn’t change it.

“The DuQuoin Street Machine National show has meant so much to me,” McCormick says. “When Roger Grizzel, Marcus Smith and Rod Saboury brought the Lifetime award and presented it to me at my ALS Benefit, I was overwhelmed.”

If you are heading out to this year’s Street Machine National show in DuQuoin, be sure to find McCormick and check out his one-of-a-kind C4. 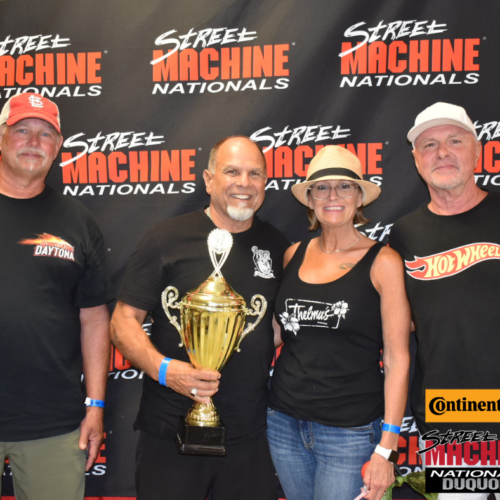